Restaurant review: An allergen-free afternoon tea at the Connaught Hotel 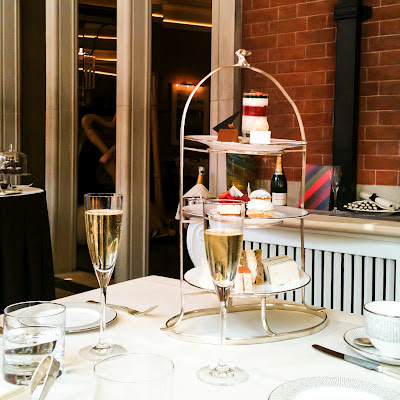 A few weeks ago we took my mother-in-law (Joan) for afternoon tea at the Connaught Hotel as a birthday treat.  In between booking the table and actually going there I was diagnosed with a multitude of food allergies.  Given that a traditional tea is composed primarily of sandwiches, scones and cakes i.e. wheat and sugar by the bucket load, I was somewhat apprehensive about asking the chef to cater to my new diet.  As it turns out I needn’t have worried.

At the Connaught, tea is served in the Espelette restaurant which is a circular room filled with natural light not unlike a conservatory (or a “posh off-shot” as Joan and Bryan (her very huggable husband) would say).  When we arrived the waiter immediately recalled my dietary requirements and spent a little time discussing them with me to ensure that the menu they had planned would not cause me any issues.  As we sipped our glasses of champagne, a harpist played in the corner and the waiter brought out the sandwich platters along with a plate of canapés for me.  These were essentially bread-free sandwiches; halved baby potatoes filled with ham, cucumbers with salmon and cream cheese, lettuce leaves with a guacamole style filling.  They were innovative and far removed from the cheese plate that I had suggested to the chef in a bid to be low maintenance.  I was a little concerned about Steve as the sandwiches contained egg mayonnaise (he doesn’t eat mayo), smoked salmon (he doesn’t like smoked fish) and cucumber (the devil’s vegetable) but he tucked in and even declared that he might be an egg mayo convert 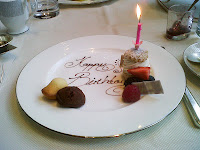 Once we had finished our champagne the waiter brought out our tea.  As you would expect there was a decent selection and, given that I used to take three sugars in my tea, I chose the sweet sounding "Paris".  It was wonderful with notes of caramel and vanilla and I didn’t miss the added sweetness of sugar at all.  Obviously I didn’t get to taste the cakes but they looked magnificent and the feedback was overwhelmingly positive.  Instead I was given a selection of sugar free desserts that were rich and satisfying and as an alternative to the scones (served with a choice of 3 jams from a menu featuring 16 homemade flavours) I was presented with a plate of fresh fruit.  By this point everyone had had their fill of sugar and it was time to leave.  But in a last ditch attempt to push my mother-in-law towards diabetes the waiter brought out a selection of miniature desserts on a decorated plate in celebration of her birthday.  Somehow she managed to find space in her stomach to fit them in but then we really had to leave as we all needed a post-prandial walk to aid the digestive process.

I can’t say that I had the usual feeling of over-indulgence that makes an afternoon tea so special but given the dietary restrictions the chefs at the Connaught did a magnificent job of catering for me.  I’m looking forward to returning once (if?) my diet returns to normality and having to unbutton the top button of my trousers as I leave.
SHARE SHARE SHARE