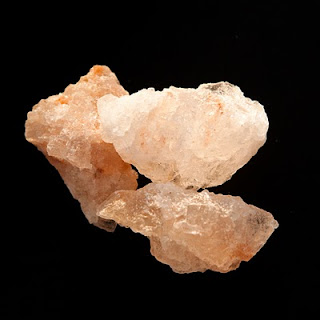 My friend Varsha (to rhyme with Russia) recently returned from a trip to the Himalayas with a gift of pink rock salt for us.  I showed it to my mum expecting her to comment on its prettiness but instead she said "Oh.  You've got sendha namak.  I've run out of that; can I have some?"

Okay so I could have probably guessed that an ingredient sourced on the Indian subcontinent is likely to be used in Indian cuisine but why had I never seen my mum cook with it before?   Well my mum's answer to that is that it is only used for cooking on fasting days.  I appreciate that the words "cooking" and "fasting" appear incongruous when referring to absolute fasting but for Hindus fasting can also mean limiting oneself to one meal during the day and/ or abstaining from eating certain food types and/ or eating only certain food types.  One of the foods that is abstained from is sea salt as Hindus believe that it is not strictly vegetarian because marine creatures may be harmed at the time of extraction.  Sendha namak (pink rock salt) is therefore used as a substitute (see recipe below).

But surely salt is salt regardless of where it is from?  Well a quick Google indicates that this is not the case.  Himalayan rock salt:

During a taste test I could not taste any difference between Himalayan rock salt and sea salt.   While I shall enjoy using my gift, I doubt that I will become a convert and will continue to take any health claims with a pinch of salt.


*Table salt isn't all bad however as it generally has iodine added to it during manufacture to combat iodine deficiency, a condition that can lead to mental retardation and thyroid gland problems.  The iodisation of salt has been described by public health experts as the world's simplest and most cost-effective measure available to improve health.


Serves 1-2 people as a main course