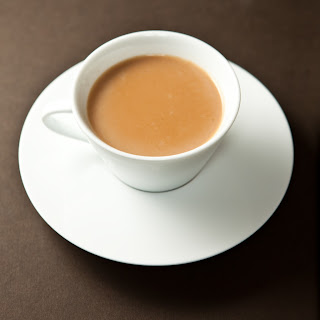 Masala chai is tea prepared with a blend of spices (a masala).  The tea leaves are heated with the water, milk and spices from cold as opposed to brewing with already hot water.  You can buy ready made tea masala in most Indian grocery stores but Indian families tend to have their own masala recipes.

As I mentioned in the garam masala post a few weeks ago, my mum found my grandfather's notes a while ago.  Amongst them was the family recipe for chai masala.  I have detailed the recipe below but the quantities involved are aimed at the masala chai addict* rather than the occasional drinker.  As such feel free to make your tea (the second recipe below) using a shop-bought masala.

* You know that you are an addict when you get a headache if you haven't had your regular fix (not naming any names, mum...!).

To make a nice cup of masala chai

Method
NB: All families vary the proportions of milk and water.  Feel free to adjust these to your own tastes.  This recipe is how my mum likes to drink her tea - most Indians prefer more milk.
SHARE SHARE SHARE