In 2005 Steve and I competed in the London to Dakar rally - a 19 day event that was memorable for a number of reasons including several near death experiences. 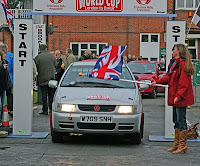 The route took us through France, Spain, Morocco, Mauritania and Senegal and throughout the journey the quality of the food varied wildly.  The best meal we had was after our first brush with death on our second day of rallying in Morocco.  I was driving and Steve was encouraging me to take corners quickly such that the back end of the car spun out slightly; great fun and we were doing really well until the surface of the road changed from tarmac to gravel.  The car skidded towards the edge of the mountain but I managed to spin it back round and crash into the rockface on the other side of the road.  This was not great for the car but at least we were alive.  If we had gone over the edge we would have fallen several hundred feet.

As we limped to the hotel at the end of the day we were both in need of comfort and tasty food.  A chap at the hotel recommended a little restaurant tucked away down a side street and it was here that I tasted lamb with prunes for the first time.  This is my take on the recipe and whenever I eat it it evokes memories of that three week adventure.